A few people have asked me recently why this blog is called Education in Two Worlds. The reason is because K-12 public education is caught in a political struggle between progressives and conservatives — the "two worlds" — as never before. There are reasons why this is so, and they are the same reasons why Congress is strung up between two worlds and is unable to act, to the chagrin of the vast majority of American voters. In particular, the advent of huge capacity high speed computers and the ready availability of detailed Census data have made the gerrymandering of legislative districts a nightmare for those who believe that politics is the art of compromise. No more: politics has become the art of feeding raw meat to your base so that you can hold onto your seat.

Never was the political struggle in education brought home to me more clearly in a personal way than when Peter Smagorinsky published a review of the book that David Berliner and I and our young Associates wrote this year. We are most grateful to Smagorinsky for the care and insight that went into his look at our book. 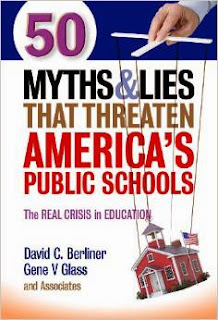 It was the comments from the public at the Atlanta Journal Constitution web site that provide the stunning example of how far apart the public is on the major policy issues facing K-12 public education. Below, I present a sample:

And the debate goes on and on. One half sees U.S. public education as an abject failure, propped up by the mendacious, greedy, and all-powerful National Education Association. The other half sees it as one of the last institutions in America attempting to protect the common good. No compromise in sight.

The opinions expressed here are those of the authors and do not represent the official position of NEPC, Arizona State University, nor the University of Colorado Boulder.
Posted by Gene V Glass at 10:42 AM