School class size matters to whom?

Class size has been an issue for millennia. "I contend that it is not only possible for one teacher to teach several hundred scholars at once, but that it is also essential.... The larger the number of pupils that he sees before him the greater the interest the teacher will take in his work." ~ Comenius (1592 - 1670) If Comenius were to be resurrected, he might be in line for a top job at the Fordham Institute or the American Enterprise Institute.

A new study just released by the National Education Policy Center is another resounding put down of the Comenius line. "Does Class Size Matter?" by Diane Whitmore Schanzenbach concludes that "Class size is an important determinant of student outcomes." But that is about as far as it goes. That this conclusion must be repeated over and over in every decade is evidence of the tenacity of the Comeniusites. Indeed, in 1982, my colleagues and I published the first meta-analysis of nearly a century of class size research and concluded that class size matters ... for achievement test scores. The book is apparently available now for about $170 – making it almost as rare as a copy of the Gutenberg Bible (don't buy it, incidentally). 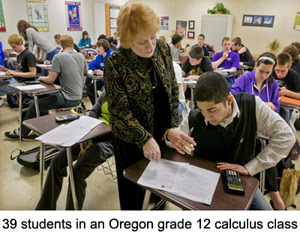 We are long past the point of having to debate about the benefit of class size reduction for students' achievement test scores. Remove 2 students from a class of 30 and the average achievement test score will rise microscopically. Remove 5 and the gain will be barely visible. Remove 15 and the scores will go up a little bit. Who cares?! The test scores are irrelevant. Whatever it is they measure – e.g., the difference between congruent and similar triangles – will soon be lost to memory.

I can tell you who cares how big classes are. Teachers. Class size research and the arguments about it are a vestige of Puritanism. Niggling effects of class size reduction are elevated to the highest level of goodness, and the working conditions of teachers are ignored. The difference between a class size of 20 versus a class size of 30 for a high school English teacher is considerable. Lab science teachers who have to set up lessons for 25 students instead of 15 know what a 67% increase in class size means. It means more work, more stress, more time spent before the morning bell rings or after the afternoon bell.

That teachers' workloads are virtually never mentioned in the research on school class size is just amazing. And when the battle is taken to the streets, the tiny achievement benefits trump the large workload increases. What other profession would tolerate being treated this way? Would lawyers accept a 20% or even 15% increase in their workload without compensation? Would surgeons? Would professors? Class size research tells us so much about the power struggles teachers now find themselves caught in. It speaks volumes about the assault on the teaching profession and their unions.

Larry Cuban, because he is an educator, is almost alone in acknowledging that large classes make more work for teachers.
Posted by Gene V Glass at 9:15 AM