Myth 5. Cyber schools are the wave of the future.*

Myth 5. Cyberschools are an efficient, cost-saving, and highly effective means of delivering education.

In the past decade, a small number of private companies have taken advantage of a market in cyberschooling that has presented itself from the convergence of home schooling, charter schools, and the Internet. By obtaining a charter in those states with permissive charter school legislation, often written by the American Legislative Exchange Council, and the vigorously recruiting home schooled students, companies like K12 Inc. and Connections Education (recently acquired by the U.K. publishing conglomerate Pearson) have able to enroll significant numbers of students in full-time schooling delivered entirely over the Internet. 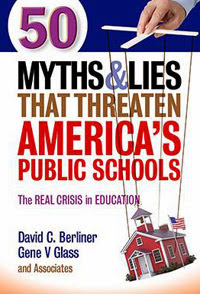 These cyberschools, with names like Colorado Virtual Academy or Pennsylvania Cyber Charter School, quickly began to earn significant profits. The authority under which they operate varies from state to state. In some places, profit-making companies can not be awarded charters. In such states, the corporations might open a nonprofit foundation in the state, receive a charter, and then purchase all services (courses, testing, record-keeping, human resources) from the distant parent corporation.

Spurred on by the search for profits and the need to keep stockholders happy, these companies have launched sophisticated advertising campaigns, even buying ad time during the Super Bowl. Ads promise a first-class education individualized for every child at no cost to the family. One of the largest cyberschooling companies spent half a million dollars on advertising and lobbying in 2010. Researchers at the National Education Policy Center estimated that in 2013 more than 300 full-time virtual public schools enrolled more than 200,000 students in the United States (Molnar, 2013).

The reality of the cyberschool is quite different from the television ads. The thought of a child as young as 6 attending “school” full time on a laptop on the family’s kitchen table sends chills up the spines of true educators. Physical education – so badly needed in these days of sedentary life for young people – music, art, lab sciences, and the like, all take a back seat to drill-and-kill basic skills instruction. In one cynical attempt to sidestep state laws that disallowed 100% online instruction, a cyberschool company mailed jump ropes to its enrolled students.

Graduation rates are abysmal, and achievement lags far behind that of their peers in brick-and-mortar schools. For the 2012–13 school year, Tennessee Virtual Academy – operated by K12 Inc. – scored lower than any of the other 1,300 elementary schools on the state standardized test. Efforts by authorities to close the school have run into strong political opposition, and the school looks to collect $5 million during the 2013–14 school year. The on-time graduation rate for students in cyberschools is about two-thirds the rate for traditional schools (Molnar, 2013).

Quality of instructional staff? Questionable. One applicant was asked 10 questions in her job interview; eight were about how she could recruit more students. In California, teachers in charter schools must be certified. Some cyberschools operating there have dodged this law by hiring one or two certified teachers and calling all their other employees "teacher aides." A large cyberschool enrolling more than 5,000 students was discovered "outsourcing" essay grading to India. Teacher turnover in cyberschools is extraordinarily high. Some former "teachers" estimate that they made about $10 an hour for the work they put in.

Cyberschooling at the K–12 level is big business. K12 Inc., one of the largest companies in cyberschooling and publicly traded on the New York Stock Exchange, reported revenues of approximately three-quarters of a billion dollars in fiscal year 2012. The industry is projected to have revenues of approximately $25 billion by 2015. For this success, company executives are richly rewarded. Ronald J. Packard, CEO of K12 Inc. made $4,126,867 in total compensation in fiscal 2013: $670,836 in salary, a $702,000 bonus, $1,500,000 in stock options, $1,250,000 in stock. Packard was a banker before starting K12 Inc. Michael Milken (indicted for racketeering and securities fraud in 1989) was an early investor, and Bill Bennett was first chairman of the board. All great educators we can assume.

The charter school movement is worried that the cybercharters will besmirch the brand name of charter schooling and is trying to dissociate itself from the cyber movement.

* David Berliner and I have joined with 15 bright young PhDs to expose 50 of the myths & lies that are threatening our nation’s public schools. 50 Myths & Lies that Threaten America's Public Schools is published by Teachers College Press at Columbia University.