Myth 9: Teachers are the most important thing in the world. (So we should fire them if their kids' scores don't go up.)

Myth 9. Teachers are the most important influence in a child’s education.

The full statement of Myth 9 might take the following form: “Dear Teachers, you are so overwhelmingly important in the education of our children, you are the be-all and the end-all, the Alpha and the Omega, that when the children aren’t learning, it has to be your fault, that’s why we are going to fire you if the test scores don’t go up.”

As obvious as it is to note the importance of good teachers, research makes it clear that teachers are not the most important influence in a child’s education. Most research shows that less than 30% of a student’s academic success in school is attributable to schools, and teachers are only a part of that overall school effect, perhaps not even the most important part. Student achievement is most strongly associated with socioeconomic status of the child’s family. Outside-of-school factors having nothing to do with teacher ability appear to have at least twice the weight in predicting student achievement as inside-of-school factors. Schools can’t supply all of what society fails to give children. 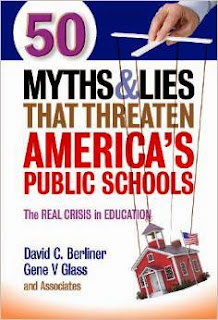 Politicians and education reformers – the Value-Added Measurement group, let’s call them – argue that holding teachers accountable for student success is the best way to improve education. The mythological importance of teachers in determining student achievement is then promoted, as policymakers strive to show that what they are doing is best for children, namely, holding teachers accountable for student success. This illusion of “doing something really important,” even if it is not likely to cause the desired changes, let’s many politicians and citizens close their eyes to the larger social and economic problems that limit what schools can achieve.

As a result, policies flowing from this myth of the all-important teacher put teachers in an untenable position. They are asked to overcome many problems outside of their control, and this can lead to devastating consequences for both students and teachers. As the pressure increases on teachers (and their administrators) to improve student performance, so does their temptation to game and to cheat the assessment system to show improvement. Cheating scandals in Atlanta, Washington, DC, Denver, and elsewhere point not just to the possibility of this regrettable situation, but to its reality (Nichols and Berliner, 2007; Ravitch, 2010).

The policies growing out of the myth of the all-powerful teacher can also result in lower teacher morale and push talented people away from considering a career in teaching. Working in an environment where you are evaluated on outcomes that are largely outside of your control is a recipe for stress, discouragement, and exit.

What appears on the surface to be a song of praise for teachers – “You are the most important thing in all the world” – turns out in the end to be an attempt to deny teachers due process and to bust unions.

The opinions expressed here are those of the author and do not represent the official position of NEPC, Arizona State University, nor the University of Colorado Boulder.
Posted by Gene V Glass at 9:37 AM