Warren Buffet a Foe of Public Education? Not Exactly.

Perhaps because of Buffet’s close association with Bill Gates — they played bridge together over the Internet and Buffet gave his billions to Bill & Melinda because he trusted their philanthropic instincts — it would be natural to think that Buffet and Bill have similar views about the future of education. Not so.

In a recent book review, Sacramento journalist Seth Sandronsky wrote: “What accounts for the reformers’ success is not actual facts but copious greenbacks from wealthy interests. … Call this class war. And according to billionaire investor Warren Buffet, his class is winning. Funding this conflict are venture philanthropists Bill and Melinda Gates, Eli and Edythe Broad, and the Walton Family foundation.” 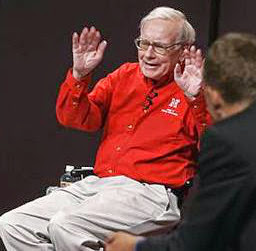 You would have to know a lot about Warren Buffet and his views on society not to come away from that paragraph thinking that Buffet is right there with the other reformers as an enemy of teacher unions and public education. Well, the truth is that Buffet does not stand with the GERM (Global Education Reform Movement). In fact, the Sage of Omaha is a sworn supporter of public education. Perhaps Sandronsky should have read this entry in the Huffington Post before loosely connecting Buffet to the likes of the Waltons, the Broads, and education reformers Bill & Melinda:

What if I said to you that the solution to the problems in our education system would be to "make private schools illegal and assign every child to a [state] school by random lottery"?

That's the view not of Karl Marx or the Chinese Communist Party but of the billionaire US investor and philanthropist Warren Buffett. The "Sage of Omaha" has been a longstanding campaigner for equality of opportunity and social mobility — and sees the existence of private schools as a major barrier to both. For Buffett, the fact that a tiny minority of wealthy families can choose to opt out of the state sector, and send their children to expensive and elite private schools, has a negative impact on the overall education of the vast majority of students whose families cannot afford to do the same.

I have long contended that a large part of Buffet’s success as an investor is due to the fact that he has spent almost his whole life in Omaha, Nebraska. His location and surroundings have given him a practical view of reality often missing in the minds of Wall Street hotshots and hedge fund managers. When the Masters of the Universe on Wall Street were chasing — and losing — fortunes buying Netscape and Napster stock, Buffet reasoned that humans in the future would probably buy underwear, and he assumed a big position in Fruit-of-the-Loom stock. I suspect that his views on public vs private education are equally sound. (Check out this previous posting on Buffet and the Circle of Competence.)

Back to Bill Gates, the Waltons, and Eli Broad. In the musical Fiddler on the Roof, Tevye, the poor milkman of Anatevka, sings the classic song “If I Were a Rich Man.” Embedded in the lyrics are these lines:

When you’re rich, they think you know.
The most important men in town would come to fawn on me!
It won't make one bit of difference if I answer right or wrong.

Yes, some rich people are right, and some are wrong.

The opinions expressed here are those of the author and do not represent the official position of NEPC, Arizona State University, nor the University of Colorado Boulder.
Posted by Gene V Glass at 9:06 AM