On Saturday, March 22, 2014, the edXchange initiative at the Mary Lou Fulton College of Education at Arizona State University held a public meeting at which the authors of 50 Myths & Lies that Threaten America’s Public Schools presented a preview of their new contribution to the debate on education reform. Something close to 150 citizens with an intense interest in the fate of our nation’s public school system were in attendance. Each of the 21 co-authors of 50 Myths & Lies spoke briefly about their contribution to the volume. A stimulating audience participation session followed the presentations. What follows are my remarks at the meeting. I spoke first and attempted to provide a bit of context for the group’s attempt to dispel the 50 myths and lies. One narrative prominent these days – the Crisis Narrative – holds that our nation is at risk because our children are dumber than Finland, because our teachers are tools of greedy unions, because incompetent “ed school” trained administrators are incapable of delivering first-rate education. 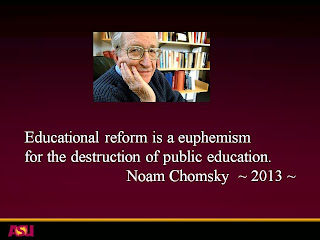 And – this narrative goes on – what public education needs is total reform: higher standards, more tests, brighter teachers uncorrupted by the wishy washy “education school” ideologies, and above all, choice and competition. This narrative serves a set of private interests that want to reform our schools. 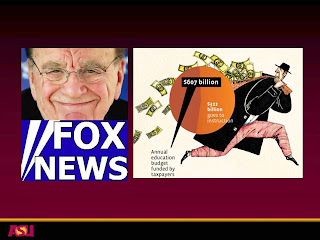 About ten years ago, Rupert Murdoch – the billionaire owner of Fox News – called public education a “$600 billion sector in the U.S. alone that is waiting desperately to be transformed.” He might have more honestly said, “Public education is a half trillion dollar plum waiting to be picked.” Here’s one of the pickers: K12 Inc is a profit-making corporation traded on the NYSE that supplies online virtual education to about 100,000 children nationwide – 5,000 of them here in Arizona. Its revenues exceed ¾ of a billion dollars annually and its CEO, a former banker, received total compensation last year of more than $1.5 million. All of their revenue comes from state-level charter school programs. To say that K12 Inc is operating a substandard education factory is to give them more credit than they deserve.

Now this Crisis Narrative of devastation and salvation by free enterprise has created its own mythology. “We need more tests to keep incompetent kids from being promoted.” “School uniforms will close the achievement gap.” “Teachers are all-important in a child’s development; that’s why we should fire the bad ones immediately based on their students’ test scores and without due process.” 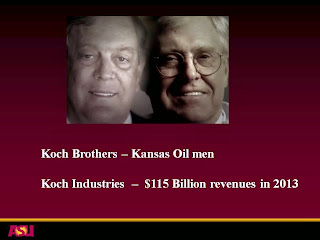 The purveyors of the mythology have been created by corporations and ideological interests that stand to gain from the coming great reformation. Enter the Koch brothers, Eli Broad, the Kaufmanns, Bill Gates, and their richly endowed ilk. In 2011 alone, the Koch Brothers donated $24 million to support free-market and libertarian think tanks and academic centers. 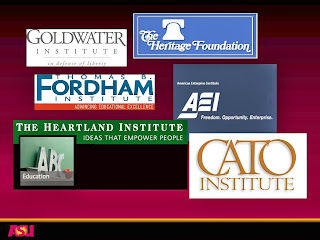 The think tanks’ mission is to get us all to believe that public education has failed and private, profit-making corporations hold the solution to restoring America to glory. Corporations enter into cozy relationships with politicians. Legislatures pass laws that create markets for private companies. This is called “crony capitalism” but its benefactors call it “free enterprise.” It’s the predominant mode of doing business in America today. 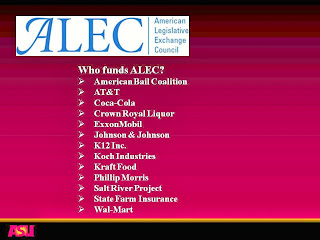 The action arm of the private corporations is known as ALEC – the American Legislative Exchange Council. ALEC is funded by right-wing foundations and private companies – the Walton family, the Koch brothers, K12 Inc. ALEC takes state legislators on fancy golf holidays to the Caribbean and hands them drafts of bills that they want introduced back home: charter school bills, assessment & testing bills, private prisons bills, bills about the sale of tobacco and alcohol. In 2012, 1,000 ALEC-written bills were introduced into state legislatures and 100 became law. Twenty-two current or former members of the AZ legislature are members of ALEC – all Republicans, including Governor Brewer. Jonathan Butcher of Phoenix’s own Goldwater Institute is co-chair of the ALEC Education Task Force – on which committee he is the only person with absolute veto power over any recommendation emanating from the committee. (Butcher was interviewed on last night’s [March 21] local news applauding the Arizona Supreme Court approval of vouchers, i.e., Empowerment Scholarships. If you think the long arm of the Koch brothers will never reach down into your life here in Phoenix, Arizona, then please think again. [On the evening of March 22, '14, a large group of Arizona Republican legislators was entertained at Donovan's steak hosted by ALEC and a group of lobbyists. Donovan's entrées easily top $50; not the kind of place that legislators hang out at when on their own dime.]

This is democracy in America today. Ever since the Supreme Court issued its ruling in Citizens United, corporations have free speech just like individual citizens and money is the same as speech. It’s just that some people speak so much louder than others.

The counter to the narrative of crisis and free enterprise is weak. You see it before you – a couple of old broken down academics who never asked for these fights, and a group of fresh, young PhDs who planned on a career in research only to discover that they have stepped into a political battleground. 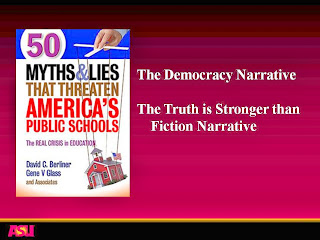 Our counter narrative doesn’t yet have a name. Call it the Democracy Narrative or the Truth is Stronger than Fiction Narrative. Our narrative is rooted in fact and research. We celebrate the enormous accomplishments of American public education. The 50 Myths book is dedicated “To our nation’s teachers, often underpaid and underappreciated, expected to reach unattainable goals with inadequate tools, who still have managed to make our public schools the path to self-fulfillment for generations of Americans.”
Posted by Gene V Glass at 1:26 PM