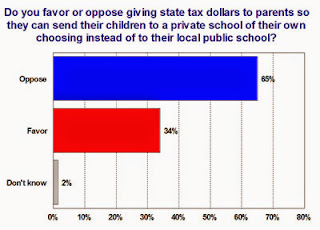 Somehow or other the brand name of "Vouchers" got sullied and bill after bill in state legislatures has gone down to defeat. A couple places – like Milwaukee and Cleveland – managed to pull off state-supported, limited "experiments" with vouchers, with quite disappointing results for voucher advocates. But the repeated attempts to get voucher programs enacted at the state level have failed due to lack of public support. Perhaps, the specter of tax money actually going to Jewish or Muslim private schools is enough to queer the deal, though the American public has no qualms apparently about tax money going to Christian private schools.

To rescue the voucher movement from extinction, free-market partisans have had to create what Kevin Welner has called "neo-vouchers." Such things as tuition tax credits, now available in almost a dozen states, create "scholarships" that students redeem at private schools, often religious in character. Arizona – the leader in tuition tax credit programs – has also created a neo-voucher known as Empowerment Scholarships. These Empowerment Scholarships are money that the state directly deposits into bank accounts from which parents can withdraw the funds to pay private school tutition. (That parents seem to be leaving the money in the account and saving it for college tuition later on is a slight glitch in the program that he legislature will take up someday.)

With the camel's nose firmly inserted under the tent, Arizona's Republican legislators – led by the American Legislative Exchange Council no doubt – undertook in this last legislative season to expand the Empowerment Scholarship program. A house bill that would have expanded the program to any child living in a ZIP code area with significant poverty failed to make it into law. It was estimated that over a period of 5 years this particular tweaking of the program would open up its coverage to nearly half the school age population of Arizona. So back to the drawing board.

House bills 2139 and 2150 sought to expand the Empowerment Scholarship program's coverage, and they have just been signed into law by the governor. HB2139 says that any sibling of a previous or current recipient is now qualified to receive an Empowerment Scholarship. What we are observing is neo-vouchers evolving into creeping-vouchers. But HB2150 either reaches the heights of empathy or sinks to a new low in cynicism. To the qualification that a child have a parent on active duty in the armed forces is added the phrase "or a parent who was killed in the line of duty." Just try and vote against that one, dear legislator.