Who's More Productive, America's Public Schools or the CATO Institute?

Andrew Coulson is affiliated with the Koch Borthers founded CATO Institute. He never tires of trying to demonstrate that America's public schools continue to cost more year-in and year-out but they don't produce more. Richard Rothstein pretty much destroyed that argument in 1995. But Coulson persists.

Coulson's latest attempt to embarrass public education finds him graphing the rise in K-12 education spending over a 40-year span against the rise in SAT scores across the same time interval for all 50 states.

Now Coulson corrects expenditures for inflation, as he should, and further corrects the SAT trend line for variables reflecting participation rates and demographic changes. He doesn't have a measure of the percentages of children entering public education over the years who are just learning English (arguably the most important variable to control for), but let's cut him some slack. Per pupil expenditure goes up; the adjusted SAT scores don't, according to Coulson. Left unstated is the implication that CATO-backed reforms of charter schools, vouchers and every other free-enterprise reform you can think of has scientific justification.

But what about the productivity of Coulson's education policy unit at CATO? What if we graphed CATO expenditures per year against number of education policy studies coming our of CATO each year. Behold! The graph. 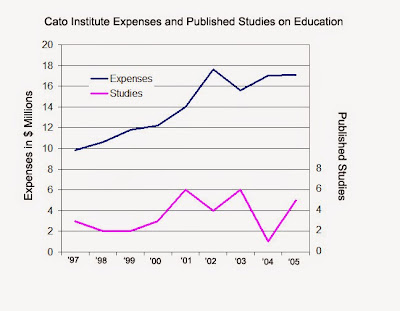 It looks to me like CATO is spending more and more of the Koch brothers money without getting any significant increase in the amount of policy research coming out of the think tank. Of course, I haven't adjusted the productivity measure for Number of Pages in the reports or for Number of Great Ideas coming out of the unit, but I plan to put my Fliegenbeinenzählen unit on that job soon.

Now Coulson would likely object to this kind of quantitative casuistry. "Not fair!", he might say. "You can't judge the work of me and my colleagues by such simple-minded counts." "We here at CATO do a lot more than just turn out policy research. We hold conferences. We appear on television. And some of our researchers were on maternity leave the last two years, and you haven't corrected for that."

Yes, you're correct, Mr. Coulson. I haven't taken those things into consideration. Reality actually is a lot more complicated than just throwing up a bunch of numbers and hoping that some gullible soul will believe them.